Mamesh Music has been providing quality Jewish music education for the Crown Heights community since 2012. We offer private lessons and ensemble classes for boys, using an unique curriculum based on Nigunim. We hold recitals, and offer special performances for the community.

​Here are the private instructors available at Mamesh Music:
​ 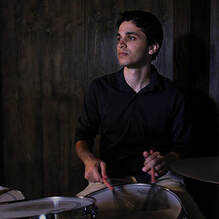 ​​Originally from Kibbutz Yakum, Israel, Eden Har-Gil is a New York-based drummer and composer. Eden fell in love with music in his early childhood while learning piano and drums. While in high school, he studied with David Rich for 7 years.
From 2015 to 2017, he studied at The Center for Jazz Studies at the Israeli Conservatory of Music in Tel Aviv. While studying at the conservatory, Eden had the opportunity to study with some of the best musicians in Israel including Mark Moshayev, Anat Fort, Omri Mor, Avi Lebovich, Roni Iwrin, Danny Rosenfeld, and more. During his studies, Eden has established himself as an active drummer in the Israeli jazz scene.
In 2018, Eden relocated to the U.S to complete his academic studies at William Paterson University and to further his musical career. Eden was privileged to study with jazz greats such as Horacee Arnold, Bill Charlap, Kevin Hays, Jeremy Pelt, Pete McGuinness and Kevin Norton.
Since 2018, while also playing as a sideman, Eden has been leading his own quartet which is planned to record its debut album soon.